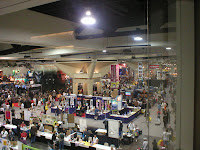 Comic Con International started tonight with Preview Night, with definitely the biggest turnout for preview night I've seen. Tons of people are trying to get to that special booth for a freebie or exclusive or tickets to a screening. There was definitely more stuff going on this preview night with lots of signings at the comics booths and more of the exhibitors doing the exclusives and freebies. I spent most of the night checking booths, grabbing some exclusives and freebies and trying to track down signing information for some of the booths. I did get a chance to chat with some of the artists on hand including Charles Vess, Brian Froud and Kinuko Y. Craft and got some stuff signed by Warren Ellis. I'm glad I did the CBLDF VIP package for the Stardust screening. When Paramount handed out regular passes they were gone in just a couple of minutes.
Biggest bag award goes to Warner Bros for their gigantic Smallville/Doomsday bags.
MGM has buses decorated with stuff for their shows, including this one for Stargate SG-1. 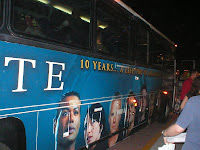 Other busses have ads for Dead Like Me promoting a new direct to DVD movie that I hadn't heard anything about.
Lee