This past weekend was the 2010 Phoenix ComiCon, which concluded a pretty crazy year and a half for me. 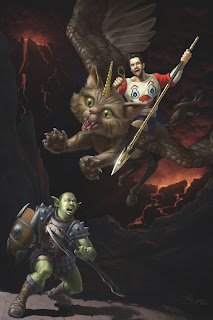 At the start of 2009 was the 2009 Phoenix ComiCon at the end of January, where I helped set up the first ever Wil Wheaton Rock Band event there.  I was vice-chair of FiestaCon, the 62nd Westercon, which happened over July 4th Weekend and helped rebound Westercon after a low turnout one in Las Vegas in 2008.  I chaired the first North American Discworld Convention over Labor Day weekend in 2009, for which our main guest (and creator of Discworld), Terry Pratchett, declared it was the best Discworld Convention ever!  A couple of weeks ago I chaired LepreCon 36, which even though we had a dissapointing amount of attendees, those that did come had a great time.  This past weekend was the 2010 Phoenix ComicCon, which moved to the Phoenix convention center after having outgrown the Mesa Convention Center, and it was definitely bigger than any prior ones.  I oversaw the SciFi programming tracked, helped put together Wil Wheaton Rock Band again this year (which was an awesome event - yes, that is me in my Devo flower pot hat), and helped set up the Super Happy Fun Time panel with Wil Wheaton and John Scalzi which announced a special charity project they are organizing.   For the first time in quite a while, I do not have a major event in the near future I'm in charge of!  However, I am looking forward to LepreCon 37 the first weekend of May in 2011 for which we will be having the first ever Shadow Unit mini-con as part of the convention.  And, for Phoenix ComiCon 2011, I hope we can make more awesome things happen.  I also attended and was on programming for Gallifrey One in 2009 and 2010, LosCon 36, Anticipation (WorldCon 2009), and also attended ComiCon International and the first two Tucson Festival of Books.

Once I get caught back up on real life, I hope to get caught up with my online life as well.