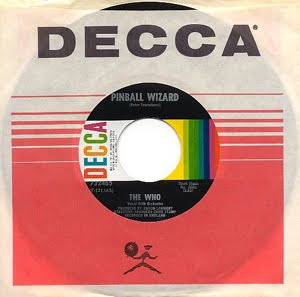 No, this is not about Doctor Who, but The Who. Seeing them perfrom live (or what's left of them) at the "The Big Game" brought back some memories of The Who, pretty much my favorite band of all time.
I first really became aware of The Who during the summer of 1969 when Pinball Wizard was getting a lot of airplay on AM radio. I remember sitting in the back of my parents car as we drove across Kansas to visit my grandparents in western Kansas and hearing Pinball Wizard a number of times on the radio going out there and back. Simon and Garfunkel's The Boxer was played just as much, but for a 12 year old kid, a song about a "pinball wizard" was a lot more cool.
So, of course, I picked up the 45 of Pinball Wizard, and I quickly became a fan of The Who, getting Tommy, Meaty Big, and Bouncy, and their other LPs. I then found out about all their songs NOT on albums and started tracking down those to get the B sides. Over the years I acquired multiple copies of many of the albums, various greatest hits and rarities collections, and of course, CDs. One time I won a complete set of Who LPs on KY102 in Kansas City when I answered the most questions correctly on a Who trivia contest, missing only one question. However, the station never actually CONTACTED me about it! I found out when a friend of my sister mentioned to her that they'd heard my name mentioned as a winner of a contest on the radio station. Once I finally verified with the station that I had won, I drove over to their offices from Lawrence, KS, to pick up my prize package. It was a complete set of Who LPs (up through The Who by Numbers which had just came out) as well as a nice pair of headphones.
Later that year was my biggest regret related to The Who. I was in my freshman year at the University of Kansas, and The Who were playing Kemper Arena in Kansas City on Dec 1st. I got tickets for it, then later realized it was the same night as my Chemistry 101 final. Now, the class was set up so that for your final grade, you got to throw out the worst test of the semester and the rest would be averaged for your final grade. I had a solid B in the class, but for whatever reason I felt that I had a good chance to do well enough on the final to bring my grade up to an A. So I sold my ticket to someone else, took the test, then did bad enough on it that it was the test that got thrown out. I was upset at the time about it, and several years later, I really had wished I'd gone to the show when Keith Moon passed away.
I did finally get to see the band a couple of times in Arizona in the 1980's, (1980 and 1982) and those were memorable shows. I'm glad I did see them back in those days at least.
One other bit of Who memories:
When I first went to Phoenix for a job interview in late 1979 and stayed the weekend, I ended up catching a double feature at the Valley Art theatre of The Kids are Alright and Rust Never Sleeps.
I still find it somewhat amusing to see that their songs are now mostly known for being used as the theme songs for the CSI shows (which is probably why CBS had them do the halftime show). But it is also fun to play their songs on Rock Band! (Incidentally, they made available a recording of their Super Bowl set on Rock Band right after the game).

Oh, and congrats to Neil Gaiman, who will finally be writing a Doctor Who episode! I figured it was only a matter of time, but he has now officially said he is doing one.