NBC's Chuck & Journeyman
Early in the week, NBC announced that it had given Chuck a full season renewal (of course, dependent on what a full season will actually mean with the Writer's strike). They have also announced that the final two episodes of Journeyman will air December 17 & 19th (Mon & Wed) at 10 pm ET/PT.

Blood Ties on Lifetime - Final two episodes online only
Lifetime will not be airing the final two episodes of Blood Ties, making them available online at lifetimetv.com. Blood Ties creator, Tanya Huff, has commented about it on her Livejournal indicating the blogs she has been doing for Lifetime TV's web site will not be posted for the final two episodes in support of the Writer's strike. She will post them on her livejournal when the shows have aired in Canada (the show is currently about halfway through the season on broadcast TV and the cable channel Space. It is not clear if Lifetime dropped the last two due to low ratings or if they didn't think they would go well with the Christmas movies they have scheduled for the next few weeks now that their Psychic shows have ended. They may also be available on iTunes.

Torchwood on BBC America - Season Two on the heels of BBC2!
BBC America has announced that they will start airing season two of Torchwood on January 26th, shortly after the BBC starts airing the series on BBC2. This is an indication of BBC America getting much more aggressive in their programming and acquisition of shows. Having Torchwood being their highest rated series ever is probably a factor as well, and this should make it do even better for the channel with a very short time span between the BBC airings and the US airings. If there's a pre-emption in the UK, BBC America might even get ahead of BBC2. The BBC, as usual, hasn't yet indicated exactly when they will start the new season of Torchwood, but you can likely be certain it will be sometime before January 26th.

This year, the People's Choice Awards has Doctor Who up for best SciFi show.

I think it would be really neat to have Doctor Who win the award over the other shows that are up for it. Here's a handy widget to use to cast your vote while there's still time.

Well, my intention to post daily from World Fantasy 2007 in Saratoga Springs, NY didn't end up happening. So here's a bit of a report with pictures. You can see other pictures from Ellen Datlow and Scott Edelman on their respective Flickr web sites. Theres also reports online, some with pictures, from artist John Picacio, author John Joseph Adams, John Klima, and others I'll ad later.

First up on Thursday, we helped to put books into the duffel bags they got this year for the book bags. There were a few good books, but definitely not enough to fully fill all of the bags. Having a shipment of 4 books from Tor not make it into the bags (due to issues with receving pallets for 4800 books) or a couple of books from Tachyon Publishing be left out made the bags a bit empty inside. 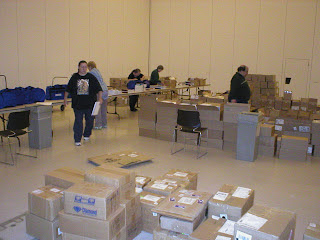 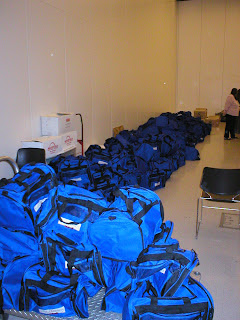 Lots and lots of filled bags. 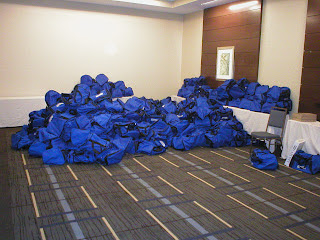 Book bags ready and waiting for the attendees to cart them off.

On Thursday night was a group author reading/signing at Flights of Fantasy in Albany, NY, with eight authors seen above in this panoramic shot made from two photos. From Left to right are Toni Kelner, Charlaine Harris, James Alan Gardner, Esther Friesner, Lois McMaster Bujold, Lynn Flewelling, Anne Bishop, and Caroline Stevermer. The cat's name is Amber. 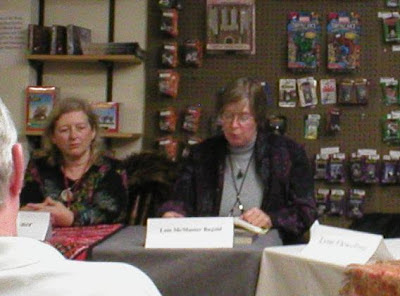 Each did a short reading. Lois McMaster Bujold read from her latest novel, The Sharing Knife: Legacies.

Back at World Fantasy, there were lots of panels during the weekend including this one on Ghosts moderated by Paul Cornell. Other panelists are Esther Friesner, Jennifer Swabach, Maria Lima, Stacey Cochran, and Jennifer Dunne. 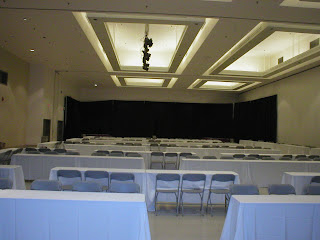 Friday night was the mass autographing. Here is the ballroom before everyone arrived. 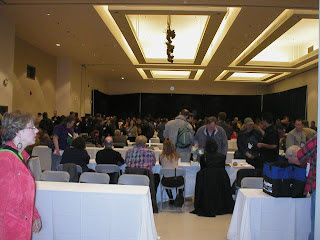 Here's the ballroom mostly filled by signing authors and fans trying to find all of them. We had a lot of books to get signed and were mostly successful. I probably should have taken more pictures, but running around with a lot of books takes a lot of time. I did get a few pictures of some authors signing or chatting. 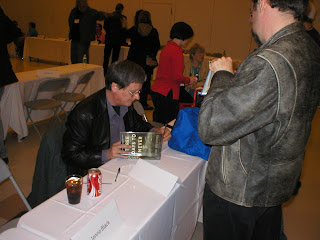 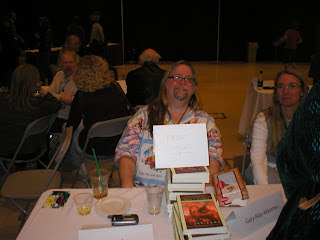 Jay Lake (with some extras of the freebie book of his) 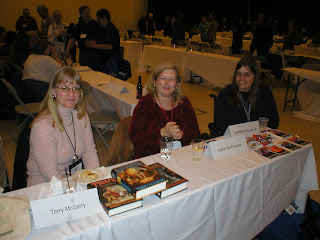 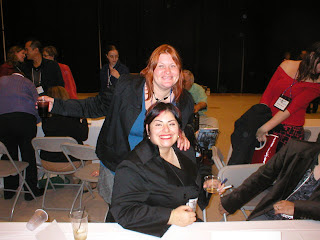 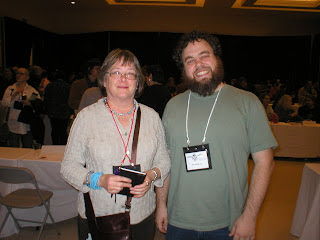 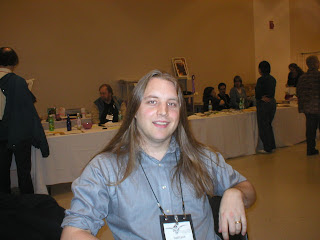 Scott Lynch (in the art show) 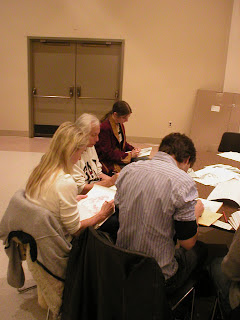 The art show was set up with a large open area where some of the artists hung out. On Saturday a lot of them were doing sketches. On the left hand side above are Boris Vallejo and Julie Bell. 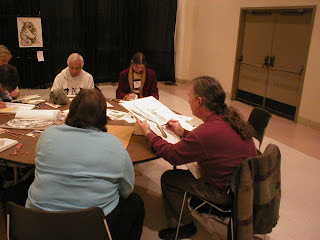 Charles Vess working on a sketch. 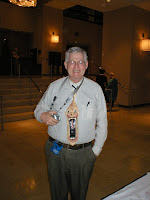 David Hartwell is known for his loud ties. I'm not sure if loud is the correct adjective for this one. He even wore it to the World Fantasy Awards banquet on Sunday.

On Sunday night we were back at Flights of Fantasy for an even bigger reading/signing. This time they were asked to read a paragraph. From left to right are Patrick Rothfuss, Delia Sherman, Joshua Palmatier, Ellen Datlow, Patricia McKillip, Sarah Monette, Elizabeth Bear, Morgan Howell (Will Hubbell), David Lunde, Jana Paniccia, Julie Czerneda, and Kristen Britain.