Dresden Files Renewal "dicey".
According to a post by Robert Wolfe on Exisle.net, things are looking "dicey" about a Dresden Files renewal. Apparently SciFi's market research is telling them people don't want more of the show. Obviously the market research is not asking the people who watch the show, read the books and want to see more of it. Short of bombarding Bonnie Hammer with foam skulls of miniature hockey sticks, there is a "Dear Bonnie" thread on SciFi.com's message board. I really think SciFi is making a mistake if they dump the show, but apparently they think they've got a big hit in the Flash Gordon remake. Maybe it getting ratings comparable to Painkiller Jane's (a .7 or .8) will give NBCU reason to relieve Bonnie of SciFi?

WesterCon 60 Next Week
Coming up the first weekend in July is WesterCon 60 in San Mateo, CA. I'll be there doing some panels and also promoting the Leprecon, Inc. WesterCon 62 bid. If I can find them, I'll have my SFTV.org ribbons to hand out as well. I'm not currently scheduled for a SF Tube Talk panel, but that could change. I will be on a panel about Heroes and one about DC Comics with Tad Williams, though. 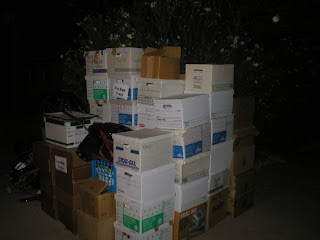 What do you do with boxes of videotapes recorded off air and even off satellite that are now taking up much less space on DVDS? With bulk trash day coming up and with getting ready to move, you get a big stack of storage boxes piled up out front! As the stack has grown, some people have looked at the boxes and at least one has disappeared. I noticed they also looked in a box that was mostly Beta tapes and passed on them.
In going through the tapes I have found a few things that I need to put onto DVD since who knows if they will ever be commerically released. Of course, things like convention panel footage needs to get transferred as well. I'm also working on getting some of my LPs transferred to digital form making use of a Ion USB turntable I got for Christmas. Using Wikipedia is a good reference to figure out which things I have on LP that are not on CD (or only available as

expensive imports). Things like the B52s cover of a Yoko Ono song only available on the initial pressings of the Whammy LP, or the rock version of Thomas Dolby's Radio Silence. Of course, there's the various re-mixed versions of songs on some of the 12 inch singles I have. As far as I know, the version of Doctoring the TARDIS on the Ford Timelord picture disc is the same as on the CD I have. I also found out that the Buckingham Nicks LP is available to download online since it has never been made available on CD, either.
Needless to say, SFTV updates have gotten a bit delayed, but I do have an updated SFTV Season to Date list available now. The Upcoming SFTV list should be updated in the next day or two.
I did my part on supporting a renewal for The Dresden Files. Still no word on a pickup or non-pickup. Hopefully when Robert Wolfe returns from his vacation (following a short stint working on The 4400, he might have some news on the Jim Butcher forums.
Fans got CBS to pick up Jericho for a mid-season run so Veronica Mars fans are essentially buying up every Mars bar they can find in the US and sending them to The CW. Mars bars are no longer sold in the US, so they are buying up imported bars or sending Snickers Almond bars as well as marshmallows. If it comes to it, maybe Dresden Files fans can start sending hockey sticks, drum sticks or skulls to the SciFi Channel.
Lee 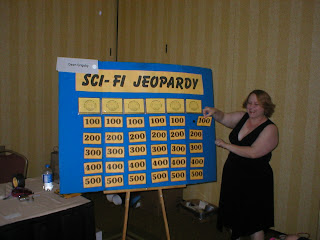 UFP SciFi Jeopardy Game Board (from LepreCon 33).
A discussion has been going on the SMOFs email list about trivia games at science fiction conventions and I wanted to have a visual to go with my post....
Lee