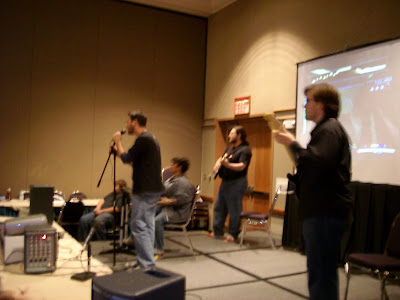 This post on Wil Wheaton's 's blog and the comments pretty much gives you a good idea of how much fun people had. Thanks to the help of various Phoenix ComiCon staff members, Harmonix, the Rock Band Blowout with Wil Wheaton was a big success.
Check out some of the videos some of the fans shot on YouTube.
And edited to add this wrap-up post by Wil...

Been keeping busy getting things ready for the Phoenix ComiCon next weekend and also trying to keep up with various other things. So here's a few random things to post here...

Coraline, the movie, based on the Neil Gamain story is coming out in a couple of weeks. They've been sending out special boxes to bloggers, but so far I haven't seen one. I guess I should have posted more about the movie beyond my 2008 San Diego ComicCon post of images of the dolls or my 2007 Neil Gaiman SD Comicon report which included the screening of Coraline footage. I've been keeping an eye on the Evil Buttons blog about special Coraline stuff being sent out or made available. I've been also trying to get one of the Coraline Keys up on Ebay (since so far that I know of, none have been distributed in Phoenix and so far, none have been provided to the Phoenix ComiCon. I was able to get three of the four Coraline toys available at Carl's Jr.

For the Phoenix ComiCon, I've been working with Wil Wheaton to set up a Rock Band Blowout with Wil, some of the other guests, and fans playing Rock Band together.