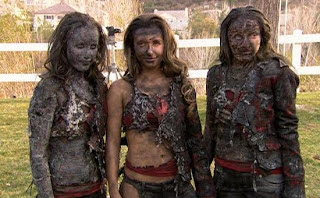 Heroes continues to do well on NBC and it just had its debut in the UK on the UK version of the SciFi Channel, breaking all ratings records for the channel and being the top rated multichannel show for the night (but still not as good as Torchwood or Lost has been doing on BBC3 and Sky One). The show will turn up on BBC2 later in the year. From the latest Electronic press kit from NBC comes this image of a trio of Crispy Claires. Which is the real Claire and which are her stunt doubles? In next week's episode we'll meet The Recruiter, played by Eric Roberts, and learn a lot more about H.R.G. 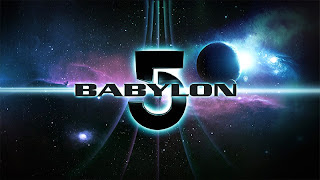 From the Babylon 5: The Lost Tales page on the Babylon 5 Scripts website comes the new Babylon 5 logo to be used for the upcoming DVD release. J. Michael Straczynski will be at the New York ComicCon this weekend and will talk about the new Babylon 5 DVD as well as the comics he's been working on for Marvel. Volume 10 of the scripts book is released on February 28th after a several month hiatus due to the B5 filming and other activities that have taken up Joe's time of late.

Dreamwatch Magazine Regenerates once again - After a long run in print that started with the Doctor Who Bulletin fanzine over 20 years ago, Dreamwatch Magazine has ended publication and has been regenerated as an online magazine at DW SciFi featuring news as well as archive articles from the past years of the magazine. It seems a general purpose magazine doesn't sell as well as show specific magazines. Titan Magazines has a good number of those on the shelves, pretty much a monopoly on the field with magazines on Star Trek, Stargate, 24, Prison Break, Buffy/Angel, Lost, and Grey's Anatomy even. It has evolved a lot from the old days where it was just Doctor Who news and commentary and I feel it lost some of it's charm when it was acquired by Titan. With the fast pace of the online genre news, a print magazine can't really keep up anymore, so they are giving it a go with an online only version.

You just know that someone not called Claire is going to die...