You want Authors? We got Authors! and some Green Slime, too!


I made it to Bubonicon for the second time last weekend, which is a small, but growing, convention that's been going for quite a while. The majority of the local authors come out to take part and they usually have a good number of authors coming from nearby areas as well as a few from out of town. It is a fairly relaxed convention and a lot of the authors hang around to chat with fans and each other, or sit in the audience for panels with other authors. 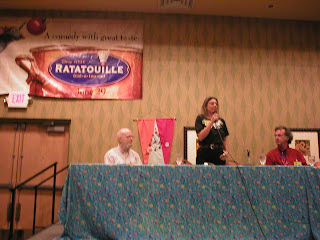 This year's Author GoH was Vernor Vinge, with William Stout as Artist GoH and Jane Lindskold as Toastmaster. Other authors participating included Connie Willis, Daniel Abraham, Walter Jon Williams and more. Check out the Bubonicon site for the full list. George R.R. Martin wasn't scheduled to participate, but did show up to hang out and participate in the group signing. 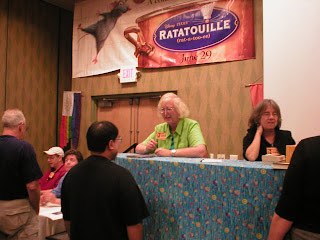 Highlights for me included Connie Willis' "50 Minutes With" where she discussed the current state of her new novel and also read from her new novella,"All Seated on the Ground", being published in the December Asimov's. It is a pretty funny story and I'm glad we won't have to wait too long before being able to read the rest of it. It's about a group of aliens who land in Denver, come out of their ship, and just stand there. For months. Without anything getting a reaction from them, until they all sit down when hearing a christmas carol. Connie left us with the line "Whatever you do, don't play them any more christmas carols!".


They had their mass autographing on Saturday afternoon with almost all of the participating authors taking part. Here's just a few of them.... 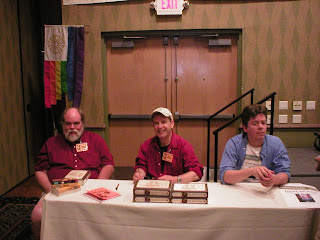 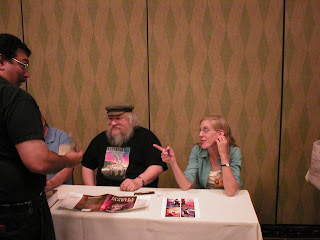 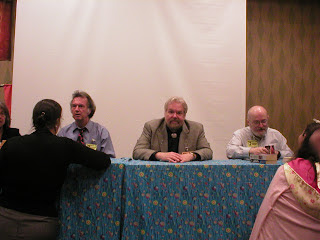 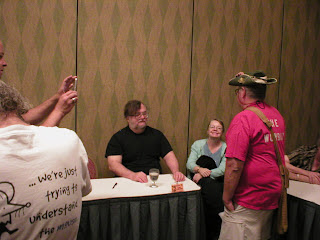 They also held a remembrance panel later in the day on Saturday, with Connie Willis and Melinda Snodgrass talking about Jack Williamson and Fred Saberhagen, who passed away in the last year. Members of Williamson's family were not able to attend due to services for Richard A. Hauptmann, a friend of Jack who passed away on August 20th. Connie, Melinda and other authors and fans related stories about Jack, Fred and Richard.


During their Sunday auction, one of their annual traditions is auctioning off a copy of John Lymington's Froomb!, a really bad novel that is auctioned off each year with the winner having to read it and write comments in the book. This has been going on for several years and they have recently added a copy of Lymington's other novel, The Green Drift, to the package. This year it went for $100! 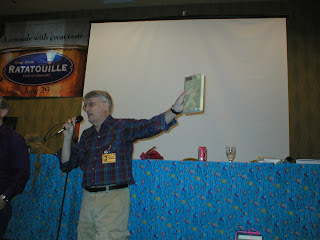 To close out the convention, the Green Slime awards is presented by Kathy K. Kubica. There wasn't a really outstandingly bad movie this year, but Underdog was awarded for being a movie that really wasn't needed, SciFi for mucking with the Dresden Files and then canceling it without giving it a chance, Laurell K. Hamilton for her continuing decline as an author, The Creation Museum, and a Superman toy with sound effects and glowing eyes when his heat vision comes on that looks demonic. 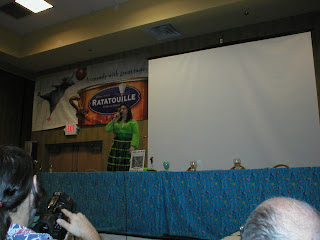 There's some con photos uploaded to the Bubonicon Flickr group (which will soon include some of mine).

If you want to get some signed books from some of the authors, you shoudl contact Who Else? Books. They do not have online listings, but most of the authors signed new and used books for them.