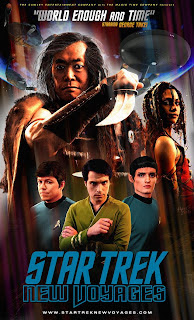 Last week saw the debut of the latest episode of the fan produced Star Trek New Voyages series, "World Enough and Time." This is the third full episode of the series and sets a new standard for "fan" produced episodes. There's been a lot of attention given to the Star Wars Fan Films and the prior New Voyages episode, "To Serve All My Days" featured Walter Koenig as Chekov in a script by D.C. Fontana, got a bit of publicity. There's also the ongoing Star Trek Hidden Frontier fan film series that has produced seven seasons worth of episodes.
For the latest Star Trek New Voyages released, Marc Scott Zicree approached the producers with a script based on a story originally developed by Michael Reaves for the Star Trek Phase II TV series that was scuttled in favor of the first Star Trek movie. Zicree directed and co-wrote the script and enlisted George Takei to play an older Sulu, seen on the Excelsior with Janice Rand (played by Grace Lee Whitney) as well as Sulu after he was stranded for 30 or so years on an alien planet. Zicree also enlisted a lot of well regarded people for behind the scenes and also worked with the regular cast to improve their acting (Zicree's wife, Elaine, ran acting workshops for the cast). When I talked with Zicree last year at WesterCon and again at CopperCon (just a couple of weeks before filming was done), he was excited about putting it together and wanted to make it the best production it could be.
For the new episode, they did a hollywood premiere and set the episode up to be streamed online but found out that they grossly underestimated the demand for it and had a lot of problems getting it streamed. They do now have it streaming for the most part and also have set the episode up on their official Star Trek New Voyages Bittorrent site.
The episode tells a good story, bringing Sulu to front and center early in the episode and putting him through an emotional wringer by the time the episode is done with. The acting by the regular cast has improved over the prior episodes and the guest cast is very good. Takei definitely enjoys getting a chance to play Sulu again and makes the most of it.
What's next for the Star Trek New Voyages crew? They've already filmed the next installment this summer, "Blood and Fire" with David Gerrold directing his own script, which was adapted from his original script done for Star Trek: The Next Generation. On David's blog, he goes into detail on the genesis for the story and the original script, why it didn't get made back then and what he hoped to accomplish with it now. This doesn't have any of the original crew reprising their roles, but he does have Denise Crosby (ST:TNG's Yar) and Bill Blair (The Alien Actor) taking part and a good crew behind the scenes including Rick Sternbach and Daren R. Dochterman (currently working on remastering the original series for HD). After that, they have a Harry Mudd centric episode, "The Sky Above, the Mudd Below", written by Howard Weinstein, and starring J.G. Hertzler (DS9's Martok) as Harry Mudd.
Until we get the new Star Trek movie next December, we've got some good efforts to watch continuing the Trek legacy.