Catching Up After LosCon, Blood on the Satellite of Love

Still catching up a bit following LosCon. Still need to write up a report or two to go with the pictures. I did get the SFTV Schedule lists updated! Lots of changes coming up in the network schedules. 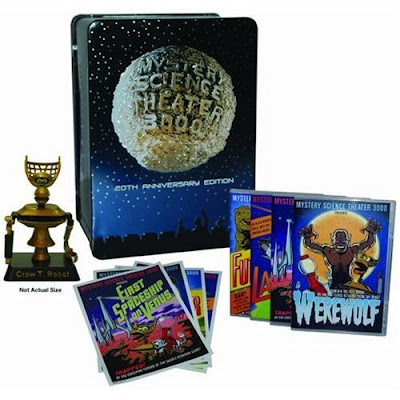 Typing has been slowed down a bit by a cut index finger that happened when I was opening the tin case for the MST3K 20th Anniversary collectors edition. Be careful opening up the back of it to free Tom Servo from his cage! Wow! In putting in the link to Amazon.com, I realized that it is now worth a lot more than what I paid for it at Borders with my 40% off coupon earlier in the week... Maybe I should auction it off complete with blood stains?