A couple of days ago, I filled out a form, promising that I would keep certain information to myself and not divulge anything about the last fifteen minutes of what I was going to see because I filled out the special document. So, was it a secret government document I was being entrusted with? No, it was the first episode of Season 4 of Battlestar Galactica, "He That Believeth In Me", that will debut online at noon ET on Friday on SciFi.com and be aired at 10 pm ET/PT Friday night on the SciFi Channel. 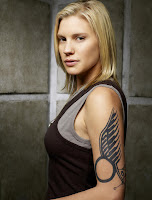 For those of you who need a refresher on where we were at the end of the season, the episode starts out with a 2 and half minute "previously on..." and the episode picks up right where we left off, with the Galactica and the fleet being attacked by a large fleet of cylons and Lee Adama having just met up with a returned (or is it resurrected?) Starbuck, who was last seen going to pieces in an exploding viper a few months back. Needless to say, everyone is a bit skeptical about Starbuck, but being a bit occupied with a possibly devestating cylon attack, they order all pilots out to join in the fight and Starbuck joins into the fray.
The battle and fight with the cylons is very dramatic and when it turns on a single instance (that only the Watchtower group knows the truth 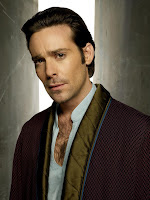 about), they are saved for the time being, albeit with some losses. As expected, Starbuck is not trusted, especially when her ship looks like it just came off the assembly line, and she is kept under watch even while she tries to explain what happened to her.
When we last saw Baltar, he was being whisked away by some women and we get to meet his followers, who want to protect him (and make him feel much better). Of course, they don't know that he has the Six in his head for that, but they are right about trying to protect him from those that would want to hurt him. 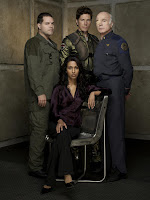 The four newly revealed cylcons (the Watchtower group) no longer hear the Dylan song but are starting to develop their own sign language, giving each other knowing looks when the subject of hidden cylons come up. They're also having a bit of trouble dealing with it on a personal level, leading to one very surprising daydream early in the episode which would liken Bill Adama to the bowl of petunias in the HitchHiker's Guide to the Galaxy ("Oh No, Not Again.").
As the first installment of the final season, it keeps things ramped up and ends with one of those "To Be Continued's" that make you want to wish they were showing two episodes this week instead of just the one.
For those of you in the NY or LA area, you may be able to take advantage of a special "Free Pizza for Humans" promotion, so watch for special ads in your area and be prepared to make a call for a late night snack. When you call them up, say ""I want to order a frakkin pizza!" and if you give them the proper answer to a question, you'll get a free one! Don't ask me which pizza places are participating, that is being kept under wraps as far as I can tell. Since it is only in the two areas, I certainly can't take advantage of it...
For lots of links and such about Galactica and the new season (and a link to scans of Tricia Helfer's FHM magazine spread - although I think we've seen her in less on the show...), check out the Galactica Sitrep blog.