In the Dramatic Presentation Short Form category, we've got the following:

Doctor Who and Steven Moffat stories are definitely on a roll, ahving won the last two years, but htis year's race might be really close. Of the five, I see the weakest one as the Torchwood entry. It got enough support to get onto the ballot, but I don't think that will equate to enough first place votes to give it any chance at the hugo.

Battlestar Galactica has a strong support base, and has gotten a fair number of votes in recent years for its entries (the first episode of the series, "33", did win a Hugo. There was some talk to put the DVD version on the Long Form ballot and it may have gotten some votes, but not enough. It would have been interesting if it had made both ballots for the different versions, though. Mojo was really pushing for the DVD version to be nominated at Gallifrey One, but I don't think there were many Hugo voters there.

STNV: Director/co-writer Marc Scott Zicree has talked this up quite a bit and did a screening of it at last year's WorldCon in Japan. He also went through a bunch of stuff to justify its nomination for the Nebula Script award. There's also still a lot of Star Trek fans out there and it could get a significant number of #1 votes. The sympathy factor may play a role with co-writer Michael Reaves suffering from Parkinson's disease. Reaves made an appearance at LosCon last year when they screened it and it was a bit hard to see him in his weakened condition. He's recently had some surgery, but I haven't seen anything about how he's been doing following it.

Doctor Who: Both entries are strong contenders and have been getting mentioned a lot. There appears to be some sentiment to lean towards Paul Cornell's two-parter since he hasn't got one yet. Of course, these are the same voters that have given the same award to Locus Magazine (for semi-prozine) and Dave Langford (fan writer) for many years running (although Langford may finally get unseated by John Scalzi this year). Moffat will be taking over the show for its fifth season in 2010, so he stands a good chance of continuing to have episodes nominated. Since it is not clear how often Paul will get to write for the series, he might not get another chance for a while.

The Neil Gaiman Factor: Neil Gaiman has come out in support of each of the two Doctor Who nominees and the ST NV nominee over the last several months, and has made additional mentions of all of them in other blog posts. Gaiman did co-write a novel with Reaves and recently had a dinner with Moffat turn into a big rumour about Neil writing a script for Doctor Who.

What will I be voting for? I'm still trying to decide. There are good and valid reasons for nominating four of them and maybe in a week I'll figure it out for myself.

In any case, the voting deadline is coming up so if you are a member (attending or supporting) of Denvention, make sure you use your vote. I could have made a difference in one category (and likely two) if I had voted last year. I think this category may be pretty close, so if you have a favorite, make sure to vote for it.

What is Science Fiction? 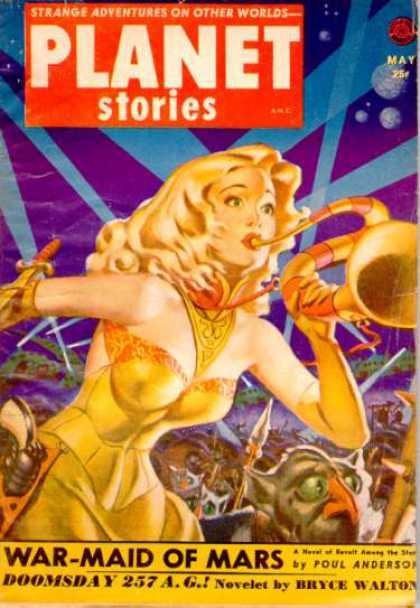 First of all, John C. Wright has a very extensively researched post about just What is Science Fiction? With many great examples like the one above.

Charlie Jade Banished to 3 am.
Following two weeks of lackluster ratings, SciFi has once again pulled an "acquired series" out of the 8 pm ET/PT time slot. This time, it is Charlie Jade, which now has a "NEW TIME MONDAYS AT3 AM!" notice on SciFi's Charlie Jade page (which translates to really early Tuesday morning). For the time being, SciFi will be repeating the previous week's Doctor Who episode in the 8 pm ET/PT time slot.

Middleman Ratings
I haven't seen any official report on the ratings for the debut of The Middleman on ABC Family this week. Indications are that it was less than spectacular, though. Hopefully it is good enough to not get it banished to 3 am in the moring. It is worrying that The Middleblog has not been updated for a week, though.

Over on NBC, Fear Itself has not been tearing things up in the ratings, but is probably doing about what NBC expected and is likely drawing the demographic they want.


Galactica Mid-Season Finale, Ghost Hunters Ratings & Darth Mojo!
SciFi appears pleased with the ratings Galactica drew in the first half of it's final season. Check out their press release. SciFi is also quite pleased with the summer run of Ghost Hunters, doing even better than Galactica! For a report on the special screening of the Galactica mid-season finale, check out Darth Mojo's blog. Mojo has a lot of neat stuff on his new blog, looking back at his work on Babylon 5 and Star Trek as well as his current work on Battlestar Galactica. He's also responsible for the Pon Farr edition of Star Trek: TMP. This week sees the debut of two shows, one a new anthology series on NBC, and the other an "acquired series" on SciFi that has aired in most of the rest of the world.

NBC Has nothing to fear, but Fear Itself (and low demographics)
Fear Itself is the new horror anthology series on NBC featuring top line horror directors and writers and some recognizable actors in the starring roles. If it seems like a familiar concept, it is. The majority of the people involved behind the scenes were also involved with Masters of Horror, which aired for two seasons on Showtime. As you might expect, Fear Itself will be subject to broadcast TV standards and will thus not have near as much nudity, violoence, gore or language as Masters of Horror could get away with on pay cable (although expect there to be special unrated DVDs released eventually). Here's the specifics on the first four episodes airing on Thursday nights at 10 pm ET/PT starting this week.

Airing June 12, "Spooked" is directed by Brad Anderson ("The Machinist") and written by Matt Venne ("White Noise 2: The Light"). While on a stake out in a haunted house, a private eye (Eric Roberts, NBC's "Heroes") is made to confront the demons of his past. Jack Noseworthy ("Judging Amy"), Cynthia Watros ("Lost") and Larry Gilliard Jr. ("The Wire") also star.

Debuting June 19, "Family Man" is directed by Ronny Yu ("Freddy vs. Jason," "Bride of Chucky") and written by Dan Knauf ("Carnivàle," "Supernatural" ). This action-charged, psychological thriller focuses on a likeable family man (Colin Ferguson, "Eureka") who switches bodies with a serial killer (Clifton Collins Jr., "Star Trek") after a near-death experience. Now, he must fight from behind bars to keep the murderer from adding his wife (Josie Davis, "Ghost Whisperer"), son (Gig Morton, "Psych"), and daughter (Nicole Leduc, "Kyle XY") to his long list of victims.

Debuting June 26, "In Sickness and in Health" is directed by John Landis ("An American Werewolf in London") and written by Victor Salva ("Jeepers Creepers"). On her wedding day, a beautiful bride (Maggie Lawson, "Psych") receives a mysterious note that reads: "The person you are marrying is a serial killer." James Roday ("Psych") stars as the groom. Christie Laing ("The 4400"), Sonja Bennett ("Eureka") and Marshall Bell ("Hamlet 2," "Tales from the Crypt") also star.

It will be interesting to see how much of an audience NBC is able to get for the show and if they stick to the entire 13 episode run. Since their primary group of advertisers will be movie companies, as long as they keep the demographics up, it might stick around for the rest of the summer. If not, they can always burn them off on SciFi or Chiller TV.

For more details, check out the NBC website for the series or The Futon Critic's show page.

SciFi Gets Jaded, Finally.
SciFi will be adding Charlie Jade to their SciFi Friday lineup this week, airing it at 8 pm ET/PT as a lead-in to Doctor Who. The series debuted in Canada in 2005 and at the time SciFi passed on it. It has developed somewhat of a cult following, though. As usual, since it is an acquired series, SciFi is doing their minimal promotion for it. They do have a web site for it at SciFi.com. You can also read more about the series at Space's mini-site for it . There's also a good writeup at Wikipedia . Unfortunately, the powers that be that controlled the official show website at http://www.charliejade.com/ have opted not to keep that site going, however, it does appear you can still look at it via archive.org .

In any case, the series does a good job handling three parallel Earths and a multitude of characters with a limited budget. Jeffrey Pierce does well as the title character (and his variations). The big question is if enough people will tune in to keep the show on Friday nights, or will SciFi decide they can do better with SG-1 repeats.